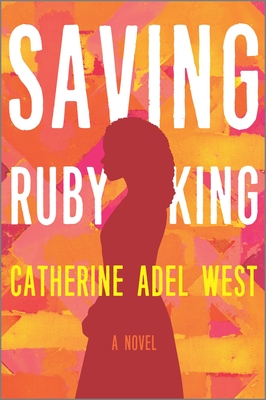 When Ruby King’s mother is found murdered in their home in Chicago’s South Side, the police dismiss it as another act of violence in a black neighborhood. But for Ruby, it’s a devastating loss that leaves her on her own with her violent father. While she receives many condolences, her best friend, Layla, is the only one who understands how this puts Ruby in jeopardy.

Their closeness is tested when Layla’s father, the pastor of their church, demands that Layla stay away. But what is the price for turning a blind eye? In a relentless quest to save Ruby, Layla uncovers the murky loyalties and dangerous secrets that have bound their families together for generations. Only by facing this legacy of trauma head-on will Ruby be able to break free.

An unforgettable debut novel, Saving Ruby King is a powerful testament that history doesn’t determine the present and the bonds of friendship can forever shape the future.

“Told with teeth and tenderness, SAVING RUBY KING is a surprising, pedal-down debut that explores what happens when the fabrics of family, faith, and friendship snag on violent machinations of the heart. Redemption and survival share a pew with reckoning and hope here, all tangled up with the ties that bind. Catherine Adel West gifts us Chicago, the black church, and a choir of flawed, wonderfully complicated characters who flash fresh with every turn of the page, who stand against the wind, who won't go down without a fight.”
—Leesa Cross-Smith, author of Whiskey & Ribbons and So We Can Glow
“Fans of Brit Bennett's The Mothers will be eagerly awaiting a copy. Like a Greek tragedy, West cleverly employs a cast of narrators, including the church building itself, to tell the story of a community where family is not always home, and the church does not offer sanctuary. Religion is supposed to save souls; however, Ruby and the other girls in this novel come to realize that friendship can only take you so far - then you must save yourself.” —Pamela Klinger-Horn, Excelsior Bay Books
" Using Chicago as her backdrop, West weaves a haunting and thought-provoking story about what happens when good people do really bad things to help protect the ones they love, and when secrets kept too long help create monsters among us. Saving Ruby King is a must-read.” —Dawn Braasch, Bunch of Grapes Bookstore
"A compelling story, unique perspectives, and lyrical prose--Saving Ruby King is a wonderful debut full of shadows and secrets, truths and lies, and the dark and the light that make up the church-going world of these Southside Chicago characters who overcome great trauma, both personal and political. Catherine Adel West is a voice for the invisible; her words a beacon in these divisive times.” —Samantha Kolber, Bear Pond Books
“Catherine Adel West's stunning debut novel explores the dark and cobwebbed corners that lurk in the history of two families. Through the eyes of the Calvary Hope Christian Church, set in Chicago's South Side, we witness the strength of community, the on-going struggle of racial divide and the sad reality of neighbors who turn a blind eye to a crisis unfolding in the house next door. The murder of Ruby King's mother is the catalyst that forces the past to the surface and holds the key to forgiveness, hope, understanding and the possibility of a new beginning.” —Maxwell Gregory, Lake Forest Book Store
“Secrets don't just hurt people; they kill. And Ruby isn't the only person who needs saving in this debut novel; pretty much everyone needs help on some level. Each character tells the story in their own voice, including their church, Calvary Hope, a building who has seen many things over the years and has secrets of its own.”
—Anne Holman, King's English Bookshop
"Catherine Adel West's Saving Ruby King is by turns heartrending and tender. It pulls us into the lives of its characters—each more complex than the next, each caught in a moment of tragedy—and shows us the power they've found in their friendships and in their faith. Saving Ruby King is an excellent selection for readers looking for a story filled with grit and hope in Chicago.” —Jenny Clines, Seminary Co-op Bookstore

My Thoughts
Saving Ruby King was hard.
Why?
Because reading the truth always is.
The truth of secrets.
The truth of lies.
The truth of hurts both physical and psychological.
Lived by the parent in childhood, and passed down to the child by default.
A default never corrected. Just understood as being "just the way that he or she is".
A curse to be borne by all unlucky enough to have encountered it.
Seen but yet avoided.
By those lucky enough to not.

Lebanon, Sara, Saul King, and Reverend Potter, are all in their own ways; the creators of the curse that killed Ruby's mother.
Each with a secret, a lie, that keeps one bound to the other.
In a timed lockstep toward the inevitable destruction of lives.

But wait.
There is also the church itself.
So much like the community it serves. There to bear silent witness to it all.
The lies, the hurt, the fear, the anger.
All there.
All building.
In that building.
Silent, but telling its own tales.
Hiding hushed cries and veiled threats. Bargains and promise behind its supposed hallowed walls and locked doors.
In just the same way that it's parishioners hide their whispers and suppositions behind cupped hands and placating smiles.

Saving Ruby King is a well written story. But one that I am tired of reading.
Because it is a repeat of stories that I see in life everyday.
Hurt people hurting people.
While those closest stand idly by and do nothing.
Instead choosing to slap the bandaid of an offered smile on the gaping wound that is the battered soul before them.
All the while knowing that they could and should do more.
But still choosing not to.
Until death or some other tragedy makes the choices for them.
And the wounded soul is forced to either save themselves, be a casualty of tragedy, or die.

Catherine Adel West is a writer/editor living on the South Side of Chicago. Her experience as a black woman shapes every aspect of her writing and she is sure to be a voice for many women. Her work has been published in Black Fox Literary Magazine, Five2One, Better than Starbucks, Doors Ajar, 805 Lit + Art, The Helix Magazine, Lunch Ticket, and most recently Kaaterskill Basin Literary Journal. Saving Ruby King is her debut novel.

Email ThisBlogThis!Share to TwitterShare to FacebookShare to Pinterest
Labels: 5 Stars, Author Tour, Own Voices, YA Contemporary