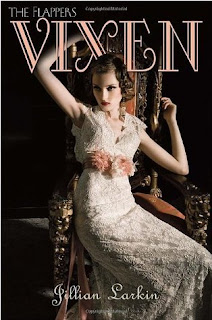 Every girl wants what she can’t have. Seventeen-year-old Gloria Carmody wants the flapper lifestyle—and the bobbed hair, cigarettes, and music-filled nights that go with it. Now that she’s engaged to Sebastian Grey, scion of one of Chicago’s most powerful families, Gloria’s party days are over before they’ve even begun . . . or are they?

Clara Knowles, Gloria’s goody-two-shoes cousin, has arrived to make sure the high-society wedding comes off without a hitch—but Clara isn’t as lily-white as she appears. Seems she has some dirty little secrets of her own that she’ll do anything to keep hidden. . . .

Lorraine Dyer, Gloria’s social-climbing best friend, is tired of living in Gloria’s shadow. When Lorraine’s envy spills over into desperate spite, no one is safe. And someone’s going to be very sorry. . . .

From debut author Jillian Larkin, VIXEN is the first novel in the sexy, dangerous, and ridiculously romantic new series set in the Roaring Twenties . . . when anything goes.  -Goodreads


A novel that appears at first glance to be all satin, bows, love songs, and ciggies; soon gives way to a veritable treasure trove of lies, intrigue, and  SECRETS.  The fun for the reader is in the discovery of who the secret keepers are versus those being kept by their secrets.  Add to this the trappings of wealth, money, power,  Prohibition Era liquor, and nightlife and you've got VIXEN.

Jillian Larkin ushers her readers right through the doors of some of the most elite families in her 1920's Chicagoland tale.  Her impeccable attention to detail and masterful turns of phrase make the diamond bracelets and frilly frocks seem to fall from the pages.  All the while...drawing the reader further in.

Gloria Carmody-(THE ANGEL)-This 'picture of innocence' good girl with a golden spoon will
capture readers' hearts as she transforms from sheltered pawn in the high-stakes game of names and fortunes to FLAPPER!

Lorriane Dyer-(THE BITCH)-She is the character that readers won't put out if she's ever on fire;and judging from the amount of liquor that she manages to down throughout the course of the story flammability is ALWAYS a possibility.  She is the wheel that never seems to stop squeaking over perceived wrongs and injustices from which she swears to never recover.  All the while plotting to destroy lives and futures with a vehemence that would make Genghis Khan blush.

Clara Knowles-(THE CHAMELEON)-Looks are definitely deceiving with this 'fresh from the farm'
beauty.  Gloria's cousin has more than a few tricks up her milkmaid's sleeve and she's using them all to keep her FLAPPER past under tight wraps.

This is a wonderful book that will have the reader begging for more.  Though the characters are in their teens; they tackle very adult issues in very believable and credible ways.  There is also no shortage of romance within this 'rip roaring' read.  (Every flapper worth her salt has to dance with somebody...right?)  The guys holding these girls lighters and the lengths to which  people go for love will make even the most jaded reader swoon.
Reviewer's Note
*This book is not recommended for young teens/tweens due to scenes containing drinking, smoking, and adult situations.*

Abby Craden's cultured lilt gave the audio version of this work an easy believability that made this an enjoyable read. Her male voices were very well done as well and never faltered or lost expression.  I was especially  impressed when she had to perform the voices of African American characters.  Their dialects and vocal nuances were never overdone.  Abby's narration brought this book to life and I hope that she reads the next.