I Will Not Be Taking "Dragon's Oath" 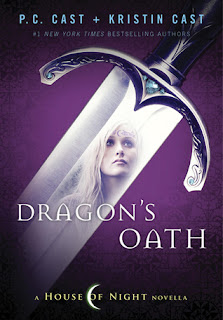 Title:  Dragon's Oath (House of Night Novellas #1)
Authors:  P.C. Cast, Kristen Cast
Format:  Book
Length:  145 pages
Publisher:  St. Martin's Press
Age Range:  Teen/Adult
Rating:  2.5 stars
The first in an enthralling new mini-series of novellas from the #1 bestselling authors of the House of Night, Dragon’s Oath tells the story behind the House of Night’s formidable fencing instructor – the love that will transform him, and the promise that will haunt him
In early 19th century England, long before he’s a professor at the Tulsa House of Night, Bryan Lankford is a troublesome yet talented human teen who thinks he can get away with anything… until his father, a wealthy nobleman, has finally had enough, and banishes him to America. When Bryan is Marked on the docks and given the choice between the London House of Night and the dragon-prowed ship to America, he chooses the Dragon – and a brand new fate.
Becoming a Fledgling may be exciting, but it opens a door to a dangerous world.... In 1830’s St. Louis, the Gateway to the West, Dragon Lankford becomes a Sword Master, and soon realizes there are both frightening challenges and beautiful perks. Like Anastasia, the captivating young Professor of Spells and Rituals at the Tower Grove House of Night, who really should have nothing to do with a fledgling…
But when a dark power threatens, Dragon is caught in its focus. Though his uncanny fighting skills make him a powerful fledgling, is he strong enough to ward off evil, while protecting Anastasia as well? Will his choices save her—or destroy them all?  -Goodreads

Dragon's Oath is the "How I Met Your Mother" story of the HON series.  By this I mean,  the bare bones formula follows the pattern that you get if you ask any couple how they met.  Love story first with a few background details for flavor and frame of reference.
When evaluating the work within the afore mentioned parameters; I am able to accept the sweet simplicity of Brian and Anastasia's story.
It is not until the element of drama is introduced in the form of Jessie Biddle, and the much eluded to "spirit of some sort of bird" that the story starts to fall apart.
Jessie is not a strong enough foil for the likes of a vampiric Sword Master and his Mistress of Spells lady.  I feel that the Raven Mocker spirit would have made a far better nemesis if introduced alone.  As it stands, Jessie Biddle is nothing more than a bumbling idiot that should have been left to die in the land of edits.
The ending also made my hair stand on end, and not in a good way.  After the fiasco of Jessie; the story takes yet another turn where it tries to connect past events to the present going's on at the HON.  (It's at this point that I tear out my hair and run screaming from the room)
Again with the unnecessary plot twists.  The whole "I could have stopped the Raven Mocker plague, if I had just killed that one when I had the chance."
*Ahem...The coming of the Ravens was explained within the mainstream HON novels; and I don't recall any mention of Mr. Biddle and his feathered friend.*

A Note to Authors
It is my feeling that when writing novellas, authors seem to forget that they are the 'term papers' of the book world.  This means that the story found therein should be concise.  There is no room for the 'fork in the road' plot twists and 'fuzzy dice in the window' aka unnecessary details that one can get away with in the conventional  novel.
Let's face it folks.  When Cinderella's sisters tried to squeeze their size 11's into her size 6's under glass.  The whole process was painful and the view was NOT PRETTY.
In short...keep the scope of the story small and all will be right with the world.  (At least that part anyway.)