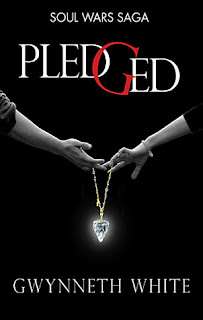 Everyone has a soul mate. But what do you do when your soul mate would rather give his soul to the demons than be with you?

Seventeen-year-old Erin has a problem. Seth has been hers forever, but now an ancient curse is tearing him away. And the demons who invoked it will stop at nothing – even murder – to claim him as their own.

How can she win against a curse so binding that it has damned countless others to this same fate – an eternity alone?

The answer lies in the past. To find it, Erin and Seth must risk all, travelling back in time to a dangerous world where love is forbidden, and life – and death – hang on a pledge.

Follow Erin and Seth as they travel to ancient Shenaya and confront the curse that has plagued their families for millennia. Caught in a war between the Angelic Guardians and the Gefallen, the disembodied dead, they must fight to keep their souls in tact and their love untainted.
-Goodreads

Despite the heat, Seth felt icy. Dread could do that to him. Or so he had recently discovered. Deep breathing usually calmed him, so he sucked in a lungful of desert air and told himself to relax. It didn’t help. By the time he’d walked from the aircraft to the immigration hall he’d ripped off a jagged piece of thumbnail, already bitten raw. He handed his US passport to the Botswanan border official, and, after a frown, and a stamp, he joined the crowd at the baggage carousel. Botswana in southern Africa was the last place on earth he’d ever have picked for a holiday destination. But he wasn’t here on holiday. Not even close.
His backpack was slow in coming. Tired from his long-haul flight from New York, he leaned against the wall and closed his eyes. Almost as if to mock him, the hated vision that had brought him to Botswana burst into his mind. In an instant he was back in ancient times, watching a man he knew only as Gideon. As usual, Gideon was huddled on a windswept hill with his band of hopeless soldiers, waiting to be slaughtered by a huge army gathered in the valley below.
Seth snapped his eyes open to stop the battle from waging in his mind. It wasn’t that he was particularly squeamish; he’d watched enough movies to iron clad his stomach against gory visuals. But no movie had ever left him icy with dread the way Gideon’s battle did. And the reason for that was simple. The moment the visions had started, he had known that the war, fought so long ago in a place he’d never heard of, was far from over. And, as reluctant as he was, he too was being enlisted to fight in a cause he didn’t understand or want.
He forced himself to focus on the present: Erin, who waited for him in the arrivals hall; his brother Kyle, whom he’d come to Botswana to visit; Kyle’s expedition to find the Lost City of the Kalahari . . .
He ripped off another piece of fingernail. Thinking about the search for the Lost City was almost as bad as the war-vision. I hope Kyle never finds the damned place. He slapped his hand on his thigh. Enough! Grabbing his backpack off the carousel, he set his face into a smile and strode into the arrivals hall.
The first hurdle was finding Erin. She was due to arrive an hour earlier on a flight from Cape Town in South Africa, one of Botswana’s neighbours. He’d never met her, although they had spoken over the phone once. Then she’d described herself as “a short, seventeen-year-old (a year younger than him) with a mass of ginger hair.” She’d sounded nice. Meeting her was the one ray of brightness in this otherwise dark picture.
He stopped to scan the crowd. A petite girl with shoulder length, reddish-blonde curls, dressed in skinny jeans and a purple blouse, immediately caught his eye. It had to be Erin. Nice legs. What’s it with girls that they always under-sell themselves? He studied her face with his artist’s eye. Vermeer would’ve killed to paint her. Suddenly wishing he didn’t look so grimy after his three plane-changes, he walked over to join her. “Hi, I’m Seth. You’ve got to be Erin. My brother’s just married your sister Izzy.”
“And after only knowing each other for about a week.”
Her dimpled grin was infectious, making him crack his trademark crooked smile. “Madness.”
“Mysterious.” Erin cocked her head to one side, seemingly appraising him. He knew he had been accurate when he’d told her he was tall and dark-haired. But what he had failed to mention was what girls had often said they liked about him: his strong, angular face, softened by expressive brown eyes. He watched her eyes rove over his grey Muse: Resistance t-shirt, taking in his broad shoulders and chest. From there they darted down his black camo-pants to his boots. Amused by her blatant assessment, he cocked his head to one side, watching her. Suddenly Erin giggled – was she embarrassed? – and picked up her bag.
“We’ve yet another plane to catch. My fourth in the last twenty-four hours,” Seth said, hoping to explain away his rumpled appearance. “To a place called Maun.”
“So we do. Let the adventure begin.”

Want to know more about Gwynneth White and Pledged
You can find it
here:
http://todayinshenaya.blogspot.com/